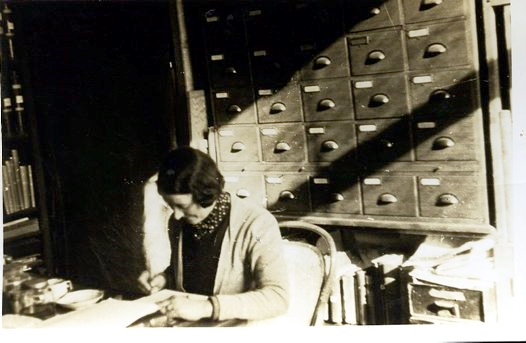 Illustrator, conchologist (i.e., one who studies mollusk shells) and museum curator Joyce K. Allan (1896-1966) was the first woman to be employed as a scientist by the Australian Museum and the first elected female fellow of the Royal Zoological Society of New South Wales.

A Fascination with Shells

Allan was born in Sydney, Australia, the eighth of nine children of the artist Joseph Stuart Allan and Florence Allan. As a school girl, she began sorting shells at the Australian Museum for conchologist Charles Hedley, and in 1917 joined the museum as a cadet to assist with collection management and provide shell illustrations for Hedley’s scientific papers. She went on to gain a permanent position as scientific assistant in 1920.1

After Hedley resigned in 1924, Allan was temporarily in charge of the Conchology section with Tom Iredale as her assistant, but the following year the positions were reversed. It would be twenty years before she became head conchologist again, on Iredale’s retirement in 1944, and even though she did not have university qualifications she was appointed Curator of Molluscs in 1949.1

Allan used her artistic talents throughout her professional life. Skilled in oils, watercolor, and pen and ink, she completed more than 9,000 illustrations of mollusks, and exhibited at the Royal Art Society of New South Wales. Collecting for the museum in New South Wales, Victoria, New Zealand and Lord Howe Island, she went on to specialize in a little studied group of colorful soft bodied mollusks in the sub-class Opisthobranchia, which included the sea hares and sea slugs.

Under her initiative, the museum’s shell displays were updated and she wrote for the Australian Museum Magazine, a respected vehicle for communicating new science to an eager readership of amateur naturalists. As the only female conchologist in Australia, Allan was often interviewed for newspapers and magazines, and her popularity was enhanced by her ability to clearly explain scientific subjects.2,3,4

Author and Illustrator of Australian Shells

The most significant achievement of Allan’s career was the monumental book she wrote and illustrated – “Australian Shells, with related animals living in the sea, in fresh-water and on the land”.5 Published in 1950 and reprinted many times, it was well received by the scientific community and a favorite with collectors, being the first attempt to comprehensively describe the majority of Australian mollusks and illustrate them in line and color drawings and photographic plates.

During the 1952 Sydney Australian and New Zealand Association for the Advancement of Science (ANZAAS) congress, Allan and marine biologist Elizabeth Pope organized a week-long visit to Lord Howe Island for delegates. Both women had conducted field studies on the island as part of their work for the Australian Museum, and this excursion was the only one of over 40 on offer that was organized by women.

Her second book “Cowry Shells of World Seas”6 was published in 1956, the same year Allan retired due to ill health. She however continued to work with the collections as honorary zoologist, and with her colleague Gilbert Whitley wrote “The Sea-Horse and its Relatives”7, published in 1958.