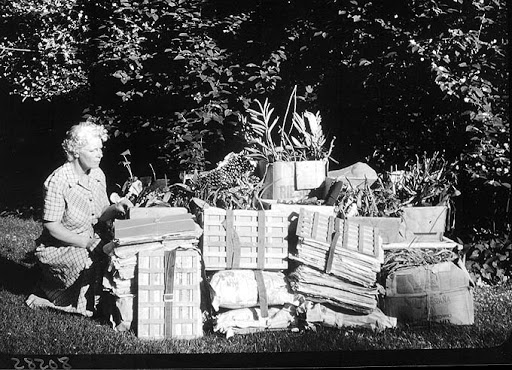 “Every collector hopes that he will be able to bring home some species unknown to science, never before described or even given a botanical name.” – Margery Carlson¹

Dr. Margery C. Carlson was born in November 21, 1892 in Arthur, Illinois.²,³ She was named after the marguerite daisy (Argyranthemum frutescens).

During her tenure of more than 30 years at Northwestern University, Dr. Carlson was also a research associate at the Field Museum of Natural History in Chicago.¹ Together with her partner Kate Staley, also a research associate at the museum, she went on many expeditions over the years to Mexico,  Central America, Europe, and the United States, collecting thousands of specimens.¹ On one of their trips through Central America in 1948, Carlson and Staley drove 10,000 miles, brought back over 4,000 specimens, 100 living plants–including the White Nun Orchid–and discovered 15 new species.9 On another expedition in 1949 Dr. Carlson discovered a species of Tillandsia that became Tillandsia carlsoniae.²

Carlson is also remembered for her devotion to conservation. She was one of the founders of the Illinois Chapter of the Nature Conservancy and the national Conservancy.1,5 Raising money, negotiating with landowners, and planting seeds were some of the ways Carlson contributed to the preservation of natural areas in Illinois, as well as Indiana and Wisconsin. The Margery C. Carlson Nature Preserve was named in her honor in 1976.5 The 400-acre state preserve is located on the Vermilion River in LaSalle County, Carlson ‘s birthplace and one of the areas she helped acquire.5 Carlson died in 1985 at the age of 92.2,6

Selection of her Publications