In 1891, Yvette Borup was born to Mary Brandreth and Col. Henry Borup in Paris, France¹. Though both parents were American, Borup would spent the majority of her early life in Europe, as her father was a military attache in France, then later Germany. During her time in Germany, Borup attended the Kaiserin Auguste Victoria School and became fast friends with Princess Louise, the daughter of Kaiser Wilhelm II and Kaiserin Auguste Viktoria, for whom the school was named. In 1913 when Princess Victoria Louise was to be married, Borup made the news in America, noted as a young socialite and childhood friend of the Princess– and the only American girl to be invited to the wedding².

The next time that Borup would be in the news was October of 1914, when she was no longer Borup, but Borup Andrews (or as was often the case, Mrs. Roy C. Andrews), having married the scientist and explorer Roy Chapman Andrews³. The pair shared a mutual connection– Borup Andrews’s brother George Borup, who was an explorer on the Peary Expedition and a fellow employee of Andrew’s at the American Museum of Natural History. The two were married in Ossining, N.Y. and made their home in Bronxville, N.Y. However, the young couple wouldn’t stay settled for long– within a year and a half they would be off to Asia for a 19-month long zoological expedition.

The American Museum of Natural History’s Asiatic Zoological Expeditions were a rather publicized affair. Between the burgeoning fame of the Indiana Jones-like Andrews (who of course pre-dates the character and is often incorrectly cited as the inspiration for the famous hero), and the novelty of a woman accompanying her husband into the depths of the wild (“Party Includes A Woman” one headline read4.

Though the Expeditions were scientific in purpose, books about them were also written for the general public–books which captivated with tales of exciting and dangerous adventures in a far away land. Camps and Trails in China (1918) was the account of the First Asiatic Zoological Expedition, which took place in China, Tibet, and Myanmar from 1916-1917. Andrews was the main author, though Borup Andrews contributed six chapters and all of the photographs, as well as her daily journals, which Andrews relied on heavily for his writing5 Across Mongolian Plains (1921) told of the Second Asiatic Zoological Expedition, which explored the Gobi Desert from 1919-1920. Andrews was the lone author, though again Borup Andrews contributed all of the photographs in addition to her journals for reference. On page viii Andrews thanks Borup Andrews, saying that “My wife, who is ever my best assistant in the field, was responsible for all the photographic work of the expedition and I have drawn much upon her daily “Journals” in the preparation of this book.”

Of course, Borup Andrews’s role was not limited to the assisting with the books– she was the official photographer of both Expeditions. As mentioned on page four of Camps and Trails in China:

Borup Andrews was the photographer of the Expedition. She had studied photography as an amateur in Germany, France, and Italy, as well as in New York, and had devoted especial attention to the taking of photographs in natural colors. Such work requires infinite care and patience, but the results are well worth the efforts expended. 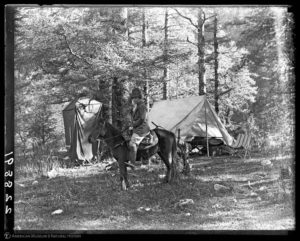 And effort did she expend. Borup Andrews travelled with a collapsible rubber darkroom of four feet in diameter– an environment that was likely unbearable in a climate described as being “95 degrees in the shade, but [with humidity] so high that one felt as though one were wrapped in a wet blanket5” But Borup Andrews’ efforts paid off. By the end of the two Zoological Expeditions, hundreds of photos and thousands of feet of footage had been obtained, depicting the people, cultures, wildlife, and landscape of vast stretches of Central Asia. Many of her photos were sprinkled throughout Camps and Trails in China and Across Mongolian Plains, bringing life to the texts. Many of her photos can also be found in the AMNH digital special collections.

Like any good expedition member, Borup Andrews held many roles in the field. Not only was she the photographer, but she was a dedicated field assistant–riding and hunting with Andrews and setting traps–as well as in dire circumstances, nurse and tailor 5,6. One role of particular note was expecting mother. The conclusion of the First Asiatic Zoological Expedition was October 1, 1917– the Andrews’ first son, George, would be born less than 3 months later (the Andrews’ second and only other child, Roy Kevin, would be born some time later in 1924)7. Like any good expedition member, Borup Andrews also endured. Out in the field, in the plains and jungles of China, Tibet, Myanmar, and Mongolia she endured pregnancy, getting spattered with battery acid,  getting bitten by her horse, and the day to day hardships of a physically demanding life in an unfamiliar and sometimes hostile environment5,6.

The First and Second Asiatic Zoological Expeditions would not be Borup Andrews’s last, although they were her last time as official photographer. She would accompany Andrews for portions of the subsequent Central Asiatic Expeditions (his most famous series of expeditions, notable for being the first to discover a full nest of dinosaur eggs). However, she is barely mentioned in The New Conquest of Central Asia (1932), the nearly 700 page account of those expeditions. Borup Andrews’s absence from those pages is perhaps not unrelated to her divorce from Andrews in 1931, which she filed on grounds of abandonment8. 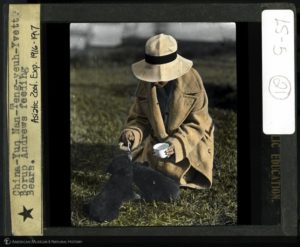 Borup Andrews was in the news several times in her life; as a young socialite mingling with the German elite; as a new bride approaching adventure; as an explorer, fresh from the field with tales to tell; and, as a divorcee. Borup Andrews’s final time in the news came in April of 1959. At the age of sixty-eight years old, she died from a car crash in Burgos, Spain. One article mentions that she had been working as a chief of the exhibition department of the Steuben Glass Company, and had been living in London9. In the time between her exploring years and her death there is very little public record from her life. Her path from Bronxville, NY to London, England is obscured from us.

Yvette ran to the edge of the grove, her hands filled with wet photographic negatives. “How many?” she called. “Two,” I answered, “and both big ones. How many for you?” “Fourteen color plates,” she sung back happy, “and all good.” – Roy Chapman Andrews, Camps and Trails in China