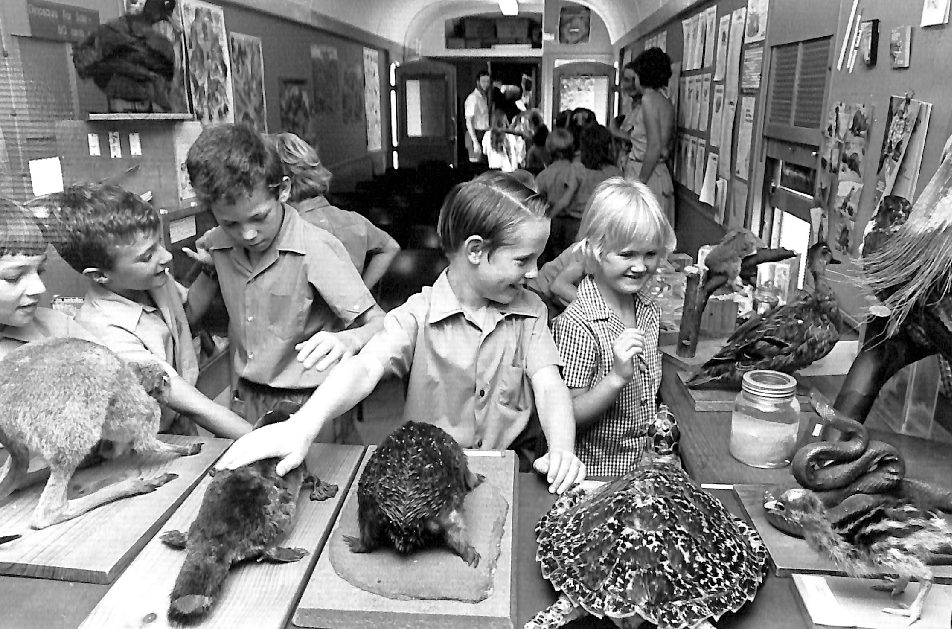 When Patricia McDonald began work as the Education Officer at the Australian Museum in 1953 she was only 24, with a science education degree from Sydney University and one year’s teaching experience. Her office was a room in a tin shed with no water or power. With similarly limited resources her predecessor, Beryl Graham, had managed to organize school class visits to the museum, host vacation film screenings for children on break from school, and develop information leaflets for the public. McDonald further developed these early initiatives and introduced many more innovative programs over the next 35 years at the museum – her entire working life. By the time of her retirement in 1988 the Education Section had become a world class facility with 20 staff members.1

From the early days, McDonald believed in a hands-on approach to a child’s discovery of the natural world, and she encouraged the curators to donate specimens which the children could handle and use. Under her lead, the Education department began its own collecting, firstly with animals of the Australian seashores. In the post-colonial Sydney of the 1950’s, when children were still being taught science with textbooks from England, McDonald recognized a need for information about the Australian natural environment. Thus she went on to write a book with museum biologist Elizabeth Pope “Exploring Between Tidemarks” in 1958 to provide Australian students an introduction to seashore ecology.2

McDonald also started a new educational program in 1965 – The Discoverer’s Club – where school students could engage with the museum collections and exhibits, complete question and answer booklets on specific themes called Walkabouts, and work their way up to attending fieldtrips with the curators. For many students, participation in this program encouraged them to pursue a career in science.3

Museum in a Box

After receiving a traveling scholarship in 1961 to study museum practice overseas McDonald was inspired to introduce school loan cases, with real specimens and teaching resources for use inside schools. Each “Museum in a Box” covered one topic and contained sliding boards of mounted specimens, dioramas, pictures, and text. This successful program required ongoing maintenance by dedicated staff and is still in operation today.4

McDonald strived to achieve proper levels of staffing and facilities, and in 1975 the new Education Centre opened, the first in any natural history museum in Australia. There were large classrooms equipped according to subject, including Dinosaurs, Investigating Animals and Aboriginal Australia, and a Discovery Room housing interactive hands-on exhibits for children. Educational films were produced and loaned to schools, and the Centre stayed current by engaging with the current exhibitions and latest scientific discoveries.

Reaching Out: Museum Train and the Wandervan

In the 1970’s McDonald oversaw two projects designed to extend educational resources to those who could not easily visit the museum. The Australian Museum Train included an exhibition carriage and a classroom carriage as well as housing accommodations for one education officer. For over ten years it travelled by railway around New South Wales, Australia reaching many new audiences including school classes and various adult groups. Another project was the Wandervan, a vehicle which contained a mobile collection of resource materials prepared by the Museum to improve accessibility for children with disabilities and the elderly. The van travelled with a designated Education Officer who would use its materials to teach in a variety of settings, including schools, hospitals, and day care centers.

McDonald also made major contributions to the wider museum community in Australia and overseas.5 As a founding member of the Education Committee of the International Council of Museums (ICOM)5 she ensured that the voice of Australia and the smaller Pacific countries was heard in the international arena. At a 1977 ICOM meeting in Leningrad, she presented a related paper entitled “The role of Museums in promoting Mutual Cultural Enrichment and Understanding among Nations.”

During the 1960’s her education officers conducted some of the first research work on museum visitor behavior and the effectiveness of museum exhibits, and in 1966 she organized a seminar on the role of museums in education for the Australian National Advisory Committee for UNESCO. One of the main aims of the seminar was to discuss ways to assess the effectiveness of museum education programs, and McDonald presented a paper on ”Assessment of Results of Education Programs.” She also published “Audience Surveys in Australia” in the ICOM Education Annual in 1970, where she wrote that at the Australian Museum, under her lead, they had been conducting questionnaires of audiences since 1960.

McDonald continued to provide leadership in the museum education field for many years after her retirement, and she also served on the boards of the National Trust of Australia and the Sydney Film Festival.